With friends, sometimes you can go “home” again.

Last August our autistic son Ian, along with his two parents, took a one-week vacation in the Great Smoky Mountains of Tennessee. It was unusual for a number of reasons.

First, the vacation was with four of Ian’s neurotypical friends, whom he hadn’t seen in almost 10 years. My wife Sharon and I had only met one of them, briefly.

Two of them searched and rented an Airbnb for all of us, conveniently located near area attractions and the Great Smoky Mountains National Park. We paid for the large unit sight unseen.

Second, as parents, Sharon and I had questions. In the years since our then 34-year-old Ian last saw his friends, had their paths and interests diverged? As neurotypical people, had his friends matured faster or differently then had Ian? Would Ian’s disability “get in the way” of reconnecting with his friends? And, quite simply, would they all still get along, and have fun together?

“I honestly felt pretty confident that my friends and I would all get along with each other, and enjoy the vacation with the good company,” Ian said. “I also did not think that my disability would get in the way of reconnecting with my friends.”

And finally, What would be Sharon and my role? We believed Ian would need our help making the plane and rental car connections. How would we fit in with the “younger” crowd? In the eyes of Ian’s friends, were the two of us as parents just along for the ride or helping pay for the rental?

Ian and most of his peers met at a memorable, post-college Super Bowl party and overnight at the beach house of a mutual friend who did not go to Tennessee. As a house gift, Ian arrived with a six-pack of Heineken, which made him an instant celebrity.

So they were not strangers.

And for us, as it turned out, all of the travel connections worked out in both directions. We’re obsessed with being early to airports, so no problems there. The rental car pickup and drop-off also went smoothly.

We had a morning flight to Knoxville from our home in Florida, so we were early for the 4 p.m. arrival time at the rental. After a leisurely lunch in Knoxville, we arrived at the Airbnb on time, and we were impressed: a spacious A-frame cabin, with four bedrooms, and a wraparound porch that included a huge hot tub that easily sat five people.

Most of the other housemates were driving from the Washington, D.C, area and they arrived shortly after us. Everybody was warm and friendly with Ian so this was looking good.

One of the first things the guys did, including Ian, was change into their bathing suits and get into the hot tub. All five of them, with Ian in the thick of things. Things were looking even better.

And things just improved during the rest of the week. We went grocery shopping and shared food. We ate together, or we ate separately. We all went with the flow, and that included Ian as an equal partner. Sharon and I were thrilled to see it, even realizing that an idyllic vacation doesn’t always represent real, everyday life, in which people with disabilities can be ignored, or worse. But on this vacation, all of our questions were answered positively, and we were ecstatic.

“I loved being able to share in the activities and hang out with my friends during the vacation,” Ian said. “That really turned out to be a lot of fun and I had a great time doing it.”

Was Ian included in every single activity of his peers? No, but we honestly didn’t expect that. Some mornings, two of the guys left early to get a head start on the crowds at the national park. But that was OK, since none of the other guys, including Ian, were exactly early-risers on vacation.

But, on the other hand, there were definite home runs.

One was a trip to a nearby water park in which Ian and I joined his four neurotypical friends. At first, the four friends went off on the rides together. But then one of them, a smart, quirky young man, John, asked Ian if he wanted to go on a few rides. Of course Ian said yes and I was delighted to see them go off together. (And, besides, it gave me a break as I was getting water-logged.)

The second trip highlight was an outing with another friend, Ron, to the Hollywood Wax Museum. Ron was a super movie fan, so when we suggested the trip, he jumped on board. We all enjoyed seeing the statue replicas of stars including Marilyn Monroe, James Dean, and Clint Eastwood.

After this museum trip, Ron told us, “Ian is the most stable of all of us.” Looking back at the ups and downs of autism, we can’t be sure, but we gratefully accepted the compliment.

By the end of our Tennessee trip we were all wondering: Would we take a vacation with Ian’s neurotypical friends again? The answer was a resounding “Yes.” Of course, it helps when the people involved are accepting and understanding.

In fact, some of these friends in our group are thinking of moving to Arizona.

Can anybody sing: By the time I get to Phoenix? 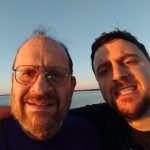 Arthur R. Henick has practiced journalism, and has been a public relations professional, for 40 years. His son Ian, an autistic person now 35, graduated from a two-year community college in Connecticut and works at an assisted living facility in Florida.

How to Evaluate Autism Research

Many autistic people like keeping up with the latest research in the field. Whether you want to self-advocate or gather information for a loved one,...

For me, it was very apparent at an early age that there was something different about the way our son Fynn was developing. Fynn didn’t...