The Importance of Building Community | Organization for Autism Research

The Importance of Building Community 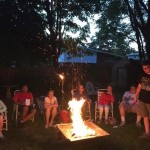 Cool Aspies now has more than 40 members who participate in all kinds of activities and social events.

Individuals on the autism spectrum can often feel isolated from their communities. They may not be integrated into social activities or have a lot of opportunity to try new recreational outings with peers their age. This can be especially true for older teens and adults. As their classmates and co-workers tend to socialize without the support of their parents, students with autism can be left out. A 2013 longitudinal study comparing the social participation of young adults with autism spectrum disorder (ASD) with other disabilities found that the young adults with ASD were significantly more likely to never see friends, get called by friends, or be invited to activities compared to those with intellectual disabilities, learning disabilities, or emotional disabilities.

Studies have found that young adulthood is a high-risk developmental period for the onset of mental health conditions, particularly depression and anxiety, in the ASD population. Creating opportunities for social engagement for individuals with ASD during adulthood may improve quality of life as well as lessen the impact of co-morbid conditions or exacerbated autism symptoms.

As an autism specialist for a school system, I ran social skill groups each week. Several of my graduates, who had entered college or the workforce, began reaching out to me, asking me if I would still do social skills group with them. I also heard from several parents, concerned that their now adult children were becoming increasingly isolated socially. One summer, I met with former students in a restaurant while their parents went to a neighboring restaurant. The young adults and I discussed what they wanted out of a social group and came up with some expectations and a plan.

They advocated for a group that focused on fun and in which everyone was treated like the adults they were. They wanted it to meet on Sundays so that it didn’t interfere as much with jobs and other responsibilities. Parents would not be allowed to attend gatherings. They wanted to meet at least twice a month but not every week. Members wanted my support as facilitator, but also wanted to do things their own way and with as much independence as possible. Then they chose a name for the new club: Cool Aspies.

Over the 8.5 years we have been in existence, the club has grown and developed its own unique culture. We now have over 40 members, split evenly between gender, with members between the ages of 18 and 30 years old. Activities have been extremely varied, including: laser tag, yoga, brunch, parties, baseball games, camping, visiting embassies and museums, volunteering, nature hikes, bowling, anime conventions, attending concerts, painting pottery, riverboat excursions, building bat houses, history tours, water parks, comedy class, talent shows, and many more.

We have adopted a membership application, which must be updated each calendar year, but do not charge membership fees. Members pay their own expenses at any events that have a cost.

The model we use is one of self-determination. Members suggest activities and help organize them. Members must RSVP independently for events and coordinate their transportation (usually by organizing carpools or planning to ride together on the metro trains). We do sometimes have additional facilitators — often special educators — who are known as “Friends of Cool Aspies.” All facilitators know that they are there for support but never to tell members what to do.

Most important, we have adopted an evidence-based practice of utilizing peer-mediated instruction and intervention, but in a unique way. The peers in our group are other members who have been in the group for several years and have developed more fluency with their social skills. This approach has helped members feel connected to one another, both in and out of the club setting. Members know that they can rely on one another, not just for friendship but also for advice on living alone, handling conflicts in the work place, dating dilemmas, or other relevant issues that come up in their lives.

Cool Aspie members and their parents report that they feel more connected and familiar with their communities, have developed close friendships, and engage in more leisure activities. Many members now join together outside of the club to go to concerts, bars, parties, and other age-appropriate social outings. Many members have mastered many other skills related to being part of a community, such as doing regular volunteer work, taking classes for fun, using Uber and public transportation, knowing how to make reservations, and socializing with new people.

Both members and their parents have had positive things to say about the club. Christina said “When I’m at Cool Aspies, it makes me feel happy. It also reminds me that I’m surrounded by my friends, boyfriend, and other people that care about me and support me, as well as value me, my own unique disability, and the things I can do.” Cassie said “Being a part of Cool Aspies means so much to me. I mean, it REALLY has. Before I joined Cool Aspies, I was a loner. But now I’ve bonded with some of my peers.” A pair of parents said “The Cool Aspies group is helping our kids to be more independent and to develop social skills. The value of that to their lives is beyond measure.” Another parent, Sissy, said “With Cool Aspies, he has a proud identity and a space that is truly his own to occupy.”

This is one model that could be easily replicated in other parts of the country to help other adults with ASD make friends and build their community. It is truly “cool” when young adults have a way to connect with each other, have fun, and feel supported.

Deborah Hammer has worked professionally for over two decades on behalf of individuals with special needs and their families. As an autism specialist for Arlington Public Schools, she provides training and support to school staff, parents, and students. She founded and currently facilitates the Cool Aspies group. She received the Eileen Crawford Award for Educators in 2017 and has twice received the Arc of Northern Virginia’s Educational Leadership Award. She has presented at several national and international autism conferences. She is co-chair of the Northern Virginia Transition Coalition and serves on the Fairfax County Disability Services Board.

Because communication is integral to people’s ability to participate in their communities, the National Joint Committee for the Communication Needs of Persons with Severe Disabilities...

What We Need to Know About AAC Interventions

One of the most significant characteristics of autism spectrum disorder (ASD) is a “delay in, or total lack of, the development of spoken language.” The...