Laura shares tips on how to introduce new foods to your child with sensory sensitivities in a supportive way. This post originally appeared on her blog and is re-posted here with permission.

“Nice job, buddy! I’m really proud of you! Did you like it?”

“Meh, it was OK…” That was enough for me! On the outside I maintained my calm demeanor, my “this was no big deal” face; but on the inside, I was celebrating like it was New Year’s!

Now, at this point you’re all probably thinking, “Wow, a bite of a carrot! She’s really got to check her brag-o-meter, because that sounds about as insignificant as watching television…” But for us, this was huge.

I’ve read many articles and blog posts about picky eaters. They put forth an expanse of knowledge and make loads of professional suggestions. They also all miss one incredibly important thing: there is an enormous difference between a “picky eater” and a “sensory eater.” The valid suggestions provided are geared for picky eaters only, but a sensory eater is a different ballgame altogether, and this is rarely if ever mentioned. I suspect that, like me, this leaves parents who have tried all the suggestions mentioned in the articles saddened, frustrated and feeling like failures.

It can come in a few different forms. There is a sensitivity to textures, where children can only handle one texture, such as smooth, pureed foods. In this case, they might be able to eat yogurt, however, hand them a bag of chips or a slice of turkey and they immediately begin to gag. This is one of the most common sensory eating issues. There are also sensitivities to flavor and smell. My son has a sensitivity to flavor; I have seen him break out into a cold sweat, red-faced and teary-eyed because a Starburst was “too sugary.”

What does this mean when eating? It means that a child might choose not to eat rather than put food in their mouth that might cause physical and/or mental pain. A common suggestion in every article I’ve read on combating picky eating: “They get what they get or they don’t eat.  Eventually, they will be hungry enough to eat.” The other variation of that suggestion: “They must try at least one bite of the new food you give them.” This suggestion makes me cringe, as it will not work for a child with sensory eating issues. If they see food as pain, it doesn’t matter how hungry they are, they don’t want to be in pain. Wouldn’t you feel the same? If I offered you a ghost chili right now, how likely are you to just pop it into your mouth without hesitation? Unfortunately, as time goes on, some inevitable behaviors begin to develop. It’s Pavlovian in nature, and they might begin to fear foods and meal times. Even if it’s a food that might not “hurt” them, they might begin to refuse to eat it, as they begin to regard eating these foods as a negative experience.

Eating out in restaurants and enjoying the social aspects of a meal can also be challenging for a child with sensory eating issues. Parents often provide constant reminders and prompts to get a child to complete each meal, every day. This often lends an additional level of stress surrounding food, eating and mealtime. Adding to the list of fears that parents have are things like vitamin deficiencies as well. Suddenly, it’s not just the body’s physiological reaction to the food, but also the behavioral and emotional stress that can come along with it.

Now, considering these factors, it becomes more obvious why there must be a differentiation between picky eating and sensory eating. For years, I would read these articles and think to myself, “none of these strategies will work for my son, he would just rather not eat.” I would see other parents’ comments laced with sadness and frustration that their children had chosen not to eat. It’s not as simple as choosing to just suck it up and try a food they might not end up liking. For them, it’s knowing that a food might make them throw up or set their little tongue on fire; it’s about being made physically uncomfortable from food.

Here are some suggestions that come from both the parent in me and the speech pathologist:

1. Most importantly, do not pressure your child! There is already enough fear associated with eating that you don’t want to increase those fears. As scary as it is to hear a diagnosis of “failure to thrive,” placing added pressures on them to eat will not help.

3. Make food fun! Desensitizing them to foods is important, so cook and bake with them often. Also, do art or craft projects that involve playing with food. For example you could make chocolate pudding and crush up Oreo cookies to make “dirt,” then place gummy worms in the dirt, etc. Let them get used to the textures on their hands first.

4. When you feel they are ready, introduce new foods in small increments. As your child gets older, his or her sensory system can naturally mature. However, the fear and behaviors they might have developed over the years might remain. To combat these fears, you must go slowly! I recently implemented a chart system for my son and so far, it seems to be helping:

After your child has successfully chewed and swallowed that initial bite, every day following you might suggest they take one bite of the new food for about a week, then the next week two bites, and so on until you feel they are eating an acceptable amount to incorporate into meals.  Now this sounds slow and laborious, and it is, but remember, they might be fearful, and many foods actually cause them physical discomfort. Our goal is to decrease the physical discomfort and remove slowly lessen the fear.

A variation of this method is to use a “feeding train.” Each compartment of the train contains foods they like, and then when they get to the caboose, it contains the new food. The expectation that they interact with the food in incremental stages remains the same.

5. The “trying plate” is another variation of this method. Place new foods on the “trying plate” and allow them to take bites when they are ready. This plate is separate from their breakfast/lunch/dinner plate. These methods could be used at one meal per day, unless you feel your child is ready to try it for two or even three meals per day.

I cannot stress enough these key points — no pressure and go slowly! Remember, our children are not just picky eaters.

Editor’s note: This story is based on an individual’s experience and should not be considered medical advice. Please consult a doctor or medical professional for any questions. 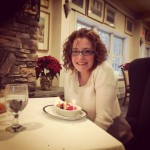 Laura Russin is a SAHM of two young children, six and four-and-a-half. She blogs as ManVsMommy to maintain parental sanity and to spread awareness of ADHD. You can find her at www.manvsmommy.wordpress.com, on Facebook at ManVsMommy, and on Twitter @manvsmommy