Kirsten Lindsmith, writer, developer, artist, and autism advocate, discusses the importance of the interpretation of physical touch, and how  discrepancies in understanding — specifically for people on the spectrum — can lead to confusing and potentially unsafe situations.  This piece was originally posted on Kirsten’s website on April 8. It is re-posted here with permission.

It’s well documented that autistic people are more vulnerable to sexual assault than their neurotypical counterparts.

One of many reasons for this, and the topic of this blog post, is an uncertainty about appropriateness of touch. I’ve heard some say this is about sensory processing, but I’d personally say this issue is less about physically processing the touch and more about processing the social context of touch.

I’ve noticed that autistic women especially are at risk of this type of boundary-pushing, just because the way our society is arranged leaves women more vulnerable in general to this type of victimization, but I’ve heard of this being an issue for autistic men as well. Pretty much across the board, neurotypical people are taught (both directly and indirectly) that flirting can never involve clear communication*.

Combine that with the fact that men specifically are taught to flirt by chasing, pressing boundaries, and trying again and again when they are told some form of “no”, and I’ve noticed that neurotypical men tend to misread autistic shyness or confusion as an invitation to try harder, and not “give up” with regards to flirting.

“But what about the men,” you might ask? Again, women can also be predatory, and autistic men are sometimes on the receiving end of this as well. I lean towards using heterosexual examples where women are on the receiving end of this both because it is a systemic rather than case-by-case issue, and because I myself am a women, and using my own experiences to illustrate.

At its mildest, these types of touch and boundary pushing can cause unease and discomfort when—for example—an autistic person isn’t sure what to make of a coworker who is constantly staring at them, touching them, and following them around the office. At worst, this is why autistic people are massively more likely to be victims of rape and sexual assault.

Personally, I’ve found that neurotypical men have a tendency to (seemingly intentionally) interpret my lack of reaction for an invitation to continue with inappropriate overtures, especially in the workplace.

Men seem to love to touch women on their lower backs, which is absolutely inappropriate in any context but a close (typically sexual) relationship. This also happens to be an overwhelming sensory experience that makes me shut down, so if, say, a coworker rests his hand on my lower back (to make a point? I’m not sure why men do this but again it happens constantly), I’m not going to throw him off or tell him to stop, I’m going to freeze.

If you are a man and having a hard time imagining why a woman being touched in a vulnerable spot by a man would be so unnerving, imagine a man much taller and stronger than you putting his hand on your throat out of nowhere. Even if his intentions aren’t “threatening,” being touched this way is very unsettling!

A neurotypical woman might react differently than I to this type of touch, if only because she would have more of a choice to communicate in that moment versus my tendency to overload and freeze up.

Additionally, I’ve found that with many men, establishing even overt sensory boundaries isn’t really possible. I once worked with a man who insisted on hugging me hello every time I saw him. He knew I was autistic, and didn’t like hugs, and his response was to chuckle and say he was going to do it anyway. He had no ill intentions; this is just how men are raised to treat women, and most think nothing of it. I’ve heard many similar stories from autistic people, both male and female. (Again, this is a systemic problem with how men treat women, but I’ve both heard of and seen women treat men this way so it definitely does happen on an individual basis.)

And keep in mind, the above examples were all workplace-related. It can get much worse at bars or parties, or, the ultimate risk, dates. Apps like Tinder can be extremely dangerous for women, and I’d also argue that they’re potentially even more risky for autistic people, men and women alike—of course the literal physical danger is highest for women who are dating men, but these risk factors affect all autistic people, in both heterosexual and homosexual social interactions. How is a person who is both overwhelmed by unexpected physical touch, and unaware of how to socially deal with someone behaving in a way that makes them uncomfortable, meant to handle a pushy date who keeps physically escalating despite their partner’s discomfort? Not well, to say the least.

This is a complicated topic that shines light not only on issues with autistic/allistic communication, but on our culture’s rules for interpersonal relationships in general. Flirting by definition is subtle, and we have for hundreds of years romanticized boundary-pushing (and crossing). But at the very least, we need to be talking about this. Especially as it pertains to our most vulnerable populations.

P.S. Seriously, if you have any insight as to why men put their hands on women’s lower backs constantly, but don’t do that to other men, please leave a comment. I genuinely have no idea why this is so common, and I consider myself pretty good with body language, so this is one of my social-translation white whales.

*For more on the why and how behind flirting as indirect communication, see this wonderful video explanation. 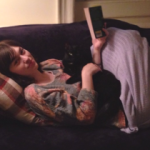 After receiving an ASD diagnosis at the age of 19, she began co-hosting the online television show Autism Talk TV and speaking at conferences and events about her experience as a woman on the spectrum. Kirsten has written columns for Wrong Planet and Autism After 16, and was profiled in The New York Times. She is a member of the board of advisors for the Yale Child Study Center’s Initiative for Girls and Women with Autism Spectrum Disorder. She currently works as a freelance software developer and autism consultant.

Kirsten graduated from the University of Massachusetts Amherst with a combined degree in Biology, Microbiology, and Anthropology, with a concentration in Vertebrate Ontogeny and Phylogeny. Her interests include full stack app development, autism spectrum research and advocacy, gender and sexuality politics, human and animal biology and behavior, and petting soft cats. She lives in New York City with her cat, Buffy, and her partner, Andrew.