A Law Enforcement Model Worth Sharing | Organization for Autism Research

A Law Enforcement Model Worth Sharing

Public safety organizations and agencies have taken note of and are responding to the rapid rise of autism spectrum diagnoses in the United States. Over the last decade, command-level police leaders, public safety executives, and legislators have expressed an ever-increasing interest in autism training for frontline professionals and positive partnerships within the autism community.

For example, new federal and state laws have been enacted to provide funding for things like tracking technology and training to assist in locating missing and vulnerable children and adults on the spectrum, and further develop training for first responders. In 2017, legislators in Florida passed legislation that directed the Florida Department of Law Enforcement to develop an autism training curriculum. Officers there can now receive credit for training that helps them, among other learning outcomes, better identify autistic persons, and, when safe to do so, give people extra time to answer questions and comply with requests; offer more personal space; use simple language; model calm behavior; and manage the sensory environment during an interaction.

This new focus on autism is not lost on command-level law enforcement professionals. The simple concept of reaching out to and working with communities they serve is well within the wheelhouse of the law enforcement’s community policing philosophy and practices. Sheriff Javier Salazar from Bexar County, Texas, is a guiding voice among law enforcement leaders who are looking for creative ways to partner and work with culturally diverse communities. Under his stewardship, San Antonio’s Hispanic, faith-based, senior, and LGBTQ communities, among others, have benefited from having a liaison officer in the Sheriff’s office.

Now the autism community has been added to that list! Bexar County Sheriff’s Office veteran, Deputy Sheriff Rodney Rangel, stepped right in to Sheriff Salazar’s mission to reach out to diverse communities to enhance cooperation, understanding, and communication.

Deputy Rangel and his wife are the parents of three children, one of whom has autism. Their seven-year-old son, Jakeryan, was diagnosed at age three. The Rangel family went through the all too familiar process of finding out what autism is and then doing something about it. They read, researched, and met other parents. The Rangels learned about the struggles, successes, and challenges that face almost four million other families around the country.

Since that appointment, Deputy Rangel has represented the Sheriff’s Office at community meetings, conferences, and autism training events in Austin, Laredo, and throughout Bexar County. Deputy Rangel assisted with Sheriff Salazar’s safety and awareness sticker program launched earlier this year for the county’s Alzheimer’s-dementia, deaf, diabetes, and autism communities. The program has been adopted in Laredo, Alton, and other areas of Texas.

Deputy Rangel, as liaison officer, has been able to devote the time to calm a teen who became upset and helped defuse a potentially dangerous situation. He was first call to offer advice to jail authorities who were tasked with finding short-term housing for an autistic young adult. Deputy Rangel has also identified other Bexar County Sheriff’s Office deputies who will participate in autism training.

Autism families, advocates, educators, therapists and others in the autism community can take note of the positive developments coming out of Bexar County Sheriff Javier Salazar’s Office. Share this report with your local sheriff and chief of police and ask them to emulate the programs in place in San Antonio.

Thanks to efforts and initiatives like these, the future for our sons and daughters is looking brighter and a little safer! 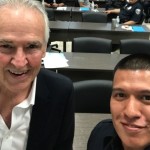 We Reillys are a typical family making our way through the 21st century. My wife, Linda, and I met in college and married in 2000....

What Is the Role of a Parent Advocate?

It’s tricky to be a parent advocate in the autism community, especially if, like me, you are not autistic yourself. Autism is about autistic people,...