For me, it was very apparent at an early age that there was something different about the way our son Fynn was developing. Fynn didn’t speak more than three words, he didn’t attempt to pull up or walk, and he didn’t interact with the people around him. All these delays signaled to me that he needed intervention services ASAP, but none of his military doctors would listen to me. Oftentimes the doctors would tell me that he was behind but was just operating on his own time and that there was nothing amiss. My motherly intuition told me that just wasn’t the case. I knew that no matter what, he was still my little man and I loved him for him. I also knew that if I didn’t speak up for him, he would never get what he needed. In the military medical system, if you don’t fight for yourself and your loved ones you won’t ever get the help you need.

The military medical system is not accessible the way people think it is; it provides the bare minimum care and even sub-standard care at times. At first, all of the doctors told me the same thing when I expressed my concerns, “oh he’s behind, but he will catch up so there’s no need to do anything. It’s not urgent.” This really upset me because I knew he needed help, but I couldn’t get it without their referrals. I switched his primary provider four times before I finally got a doctor that listened when I spoke and took the time to look at my concerns and my son.

Once I found the perfect doctor, she seemed to agree, but she could not simply refer him for intervention. Due to the Tricare medical system he had to be sent to a developmental pediatrician for evaluation. This step meant more months of waiting just for him to get an appointment. By the time he was seen, he was already 18 months old and falling further behind, which deeply concerned me. Then the developmental pediatrician said the magical phrase, “he is on the spectrum.” I was relieved that someone other than me saw that he was different and that he needed specialized care.

We then waited for the system to process the referrals for Speech, Occupational Therapy (OT) and Applied Behavioral Analysis (ABA). It took a month for him to be seen for the initial consultation for speech and OT. They determined that he needed services three times a week at a minimum, so we jumped right in. He quickly made leaps and bounds in both his language and his motor skills. He was walking, climbing stairs, and speaking over 25 words in four months. Around this time, he was seen by the first ABA company we tried.

We thought because it was a national “chain” of ABA centers we thought it must be good; we quickly learned that was not the case. They kept putting off starting him, they didn’t share their treatment plan and they had limited hours. My husband and I are both active-duty military, so a company with limited hours was going to be a major issue. The biggest problem was that they refused to comply with Tricare’s strict rules, so we went searching for a new company.

Since Tricare refused to help us find a company that fit the requirements, we did all the work. Two months later we found a fantastic locally owned-and-operated ABA center and we knew right away it was a perfect fit. They were small, which meant individual attention, and our little man took right to them. It was a miracle! When they told us he would need 40 hours a week of therapy it blew our minds because it seemed like so much, but he took right to the routine of it and to his new therapists.

He is now three, speaks in full and coherent sentences, holds short conversations at times and is also learning to do self-care activities. The ongoing battle is making sure he continues to get care and it’s always precarious because Tricare is constantly changing their policies. Too much change could make care nearly impossible to access because fewer companies are willing to work with them. Just remember, no one is going to fight for your babies like you and don’t ever let anyone make you feel like advocating for them is wrong. 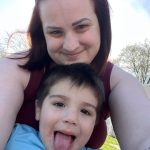 Kiersten Vargas is a 30-year-old mother of two. Both Kiersten and her husband have been active duty service members in the US Air Force for eight years. They have two neurodivergent kids, Rafael, who is five, and Griffyn “Fynn”, who is two. Fynn has Autism Spectrum Disorder and Rafael has ADHD. It brings many challenges to have two children with special needs and be a military family, but they wouldn’t have it any other way.

According to a report by the United Health Foundation released in early October, suicides among adolescents ages 15 to 19 jumped 29% over…