The Importance of Autistic Representation in Film | Organization for Autism Research

The Importance of Autistic Representation in Film

Film portrayals of autism and other disabilities have enormous power. When neurotypical or non-disabled people see representation of autistic or disabled people in film, it serves as “easy education” — they learn from the messages in the movie. That is why misrepresentation in the film industry regarding autism and other disabilities is a serious issue. Improper education can lead to ableism, which is discrimination against, judgement of, or misrepresentation of a disabled person. Misrepresentation should not be tolerated. Furthermore, individuals in the disabled community advocate for their rights and combat ableism frequently, especially in the film industry. Thus, the best way to challenge misrepresentation and prevent ableism in film is by ensuring that autistic individuals are involved in all film and media productions surrounding autism.

One of the major issues in the film and media industry is lack of representation of autistic voices assisting in production. Similarly, this is the reason why non-autistic actors should not be cast to represent those on the spectrum without proper disability education. Why is this important, you may ask? Let’s consider the 1988 film Rain Man. Rain Man tells the story of two brothers — Charlie, who is neurotypical, and Raymond, who is autistic. Although Rain Man isn’t the only film that represents autism, it is how many disability-uneducated individuals view the diagnosis, as the film was a big hit. Thus, it is a major issue that the film morbidly fails to properly represent autism. Not only does the film use outdated slurs, like the r-slur, but it confines Raymond’s talents to counting cards in Vegas, counting toothpicks, and general simplicities. In the article “The Portrayal of Autism in Film, Post Rain Man,” Kate Hannam concluded that Rain Man has changed public perceptions of autism. Because of the film’s negative and stereotypical portrayal of autism, neurotypical individuals saw autism in a more negative light after viewing the film than they had prior to viewing the film.

To emphasize, Rain Man was presented in mainstream media and created at a time when individuals with autism were more commonly placed in mental institutions. This concept is important because these beliefs still impact the lives of autistic people today. Institutions such as the Judge Rotenberg Center in Massachusetts can still legally administer electric shock devices on individuals with disabilities, including autistic people. For some perspective, in Milliamperes (mA), a fatal shock is determined as 100 mA for about 2 seconds. The Judge Rotenberg Center can administer shocks up to 90 mA. Shocks at the 90 mA level can also cause 3rd degree burns, tissue damage, and nerve damage. For comparison, taser guns used by police have an average 2-4 mA. When the public views autism and other disabilities in a negative light, centers with lethal means, such as Judge Rotenberg Center, can justify horrifying practices towards disabled individuals.

Although Rain Man may have failed at properly representing autism, more recent film directors and casting directors have evidently learned from its failures. This is seen in the movie Temple Grandin, which is based on the real life of the autistic scientist Dr. Temple Grandin. Dr. Temple Grandin is a force to be reckoned with. She is an author, educator, speaker, and innovator in our community. In the HBO movie, Temple Grandin played an active role as a producer. In her role, she distributed tapes of her voice to Danes, who was able to frame Grandin’s personality by listening to Grandin speak for hours on end. Danes also showed dedication by learning Grandin’s mannerisms and portraying them accurately and respectfully. Grandin’s role as a producer paved the way for positive representation in film. Our voices need to be heard and properly represented in any film that chooses to display a part of us. Positive representation opens up a variety of opportunities for the autistic community. For example, Grandin went on to receive many awards and fellowships after the HBO movie made more people aware of her story and her work. Promoting positive representation enables us to share our ideas and interact with society without the fear of being outcast.

Finally, another film that properly represents autism is Disney’s short film entitled Loop. Loop is about Renee, played by a real non-speaking autistic actress named Madison Bandy, who attends a camping group with fellow peers and forms a bond with one of her classmates. The film is beautiful, in that it promotes autism acceptance and demonstrates the true capabilities of those on the spectrum. Renee is able to share her world through her own eyes. The short film begins by displaying the world in a bright, almost blinding manner, similar to the overstimulation that may be experienced by photosensitive individuals with autism. Renee is also shown using her phone to communicate with her fellow campers, similar to how non-speaking autistics do in real life. The boy she is placed canoeing with even tries, and enjoys the activities Renee is shown using as a comforting skill. The animation tops off this masterpiece by demonstrating Renee stimming (a movement or gesture to release emotional pressure or excitement) when she is elated by the enunciation of her phone chiming her favorite tune of, “Woof Woof Woof,” in an echoey tunnel. The fact that Renee is actually played by an actress with true life experience is even better. Bandy perfectly encapsulates Renee; she is able to convey emotion in Renee’s discomfort. Bandy does an excellent job at utilizing her experiences as an asset in her work through her talented voice acting. In this film, Disney set the standard for proper representation, and told a story that exhibited a beautiful friendship that absolutely shattered stigmas.

All in all, autistic individuals must be involved in all film productions surrounding autism. When autism is properly represented, films can help prevent hate, ableism, and discrimination. Based on Hannam’s study, it is evident that mainstream films have a major impact on the livelihood and the neurotypical understanding of those with autism and other disabilities. Today, and always, Rain Man is highly inaccurate, and a disgrace to the autistic community; films like Rain Man are negative forms of disability education.

In contrast, films like Disney’s Loop and HBO’s Temple Grandin are two positive forms of representation that should be embraced and replicated in other films. It is important that the neurotypical public continues to stay educated and support films that have a diverse team with goals of uplifting underrepresented communities rather than personal gain. We need the public to stand with us, not against us. 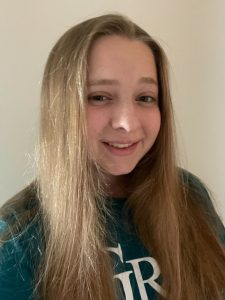 Samantha Harker is a 17-year-old female advocate with autism. She has been attending college since age 14 and currently attends the University of Health Sciences and Pharmacy in St. Louis Missouri as well as Arizona State University under the SCAP scholarship. She is the recipient of the 2020 Schwallie Family Scholarship from OAR. She aspires to become a Neurologist and will graduate college in Spring 2022. She memorized 1,294 digits of pi in two days and plans to go for the national record. Samantha is writing her first novel and continues to narrate her experience with autism in overcoming trauma and reaching her goals. Visit Sammie’s website here and follow her on Instagram.

Kronstein, Alex. “About electroshocks at a US institution for people with learning disabilities, and a bit of a Nova Scotia angle.” The Nova Scotia Advocate, 18 Apr. 2019, https://nsadvocate.org/2019/04/18/about-electroshocks-at-a-us-institution-for-people-with-learning-disabilities-and-a-bit-of-a-nova-scotia-angle/.

Young, LaCreanna S., “Awareness with Accuracy: An Analysis of the Representation of Autism in Film and Television” (2012). Research Papers. Paper 256. http://opensiuc.lib.siu.edu/gs_rp/256.

Townes-Witzel, Sydney. “Understanding Autism: Exploring Society’s Classification of the Autistic Body and the Representations of Autism in Literature and Film.” InSPIRe @ Redlands, inspire.redlands.edu/cas_honors/45/.