Supported Decision Making: When Your Chosen Supporters Are Not Your Biological Family | Organization for Autism Research

Supported Decision Making: When Your Chosen Supporters Are Not Your Biological Family

Tucker James Collins (TJC): When I was a child, my mother told me that she thought I had Asperger’s Syndrome. She framed this in terms of me being socially awkward and intelligent. My siblings complained about me being “weird”, and no adults in my family dissuaded them from using this label. I received no services, and no diagnosis. My mother died when I was fourteen.

I knew definitively by the time I was 19-years-old that I had Asperger Syndrome, and sought to understand how my life experiences were influenced by this. The support that I needed wasn’t there with my biological family, but I now have that support with my “family of choice”: Ben, Amber and their children.

Amber Dorko Stopper (ADS): We first met Tucker when he was 17-years-old during the summer before his Senior year of high school. His older brothers had recommended him as a babysitter, and he would eventually babysit, house-sit, and pet-sit for us as well.

My father had Asperger Syndrome, and from my first conversation with Tucker, I believed that he did too. I noticed Tucker’s siblings complained about Tucker’s behaviors (they said he that he was emotionally remote even during his mother’s death, and when you asked him a simple question, he answered with a series of seemingly unrelated statements, “like I was supposed to be answering a riddle, when I just wanted an answer”).

I felt that Tucker might need some support rather than criticism. Over a period of two years, I suggested current articles and books about autism, and agreed to talk openly with Tucker about the things he did that people considered “irritating” or “weird”, to see how communication could be improved. None of his immediate family members were very receptive to this. We offered to send one of the siblings to a Neurodiversity Conference, but he never responded to our offer. I found this particularly heartbreaking, as he is Tucker’s twin.

For college, Tucker was not comfortable with the idea of living at home to attend Drexel University, so he attended Georgetown University, which offered more financial aid.  His freshman year turned out to be very stressful. When it was clear that staying at Georgetown was not going to be successful, Tucker moved in with our family and began at Drexel University in the Fall of 2013. He became a member of our household, though we had already long considered him family.

TJC: When I was navigating my first year of college on my own, I maintained good grades, but being independent for the first time was very taxing for me. I was trying to manage the expectations of a heavy school load, made a greater effort to pursue social interactions than I did in high school, and had difficulty setting priorities. Months passed during which I never went more than a couple of days without having to stay up all night to meet the next day’s deadlines. I would hang out with other students and go to parties, though nothing ever let me return to schoolwork refreshed and ready to get ahead. From the start, I felt like I was sinking, and I only breached the surface again after all my final exams passed.

Grades aside, I came back to Philadelphia with some feeling of defeat over how the year went. That summer, I began spending time regularly at Amber and Ben’s house, and for the first time, my Asperger’s was being addressed. By the end of the summer, I was living full-time with Amber, Ben and their kids.

While I am ready to make my own choices and am capable of doing so, I still need support. The things that I need help with are primarily related to time management, procedural, and other executive functioning-type things, and much less related to academic content. I do not feel impaired or less independent when I get help with financial aid or taxes. Rather, having someone else around when I am doing these things improves my own ability to make decisions, ask questions, get answers, and follow through with a plan.

ADS: When Tucker talks about me, Ben, and the kids to other students or faculty, we are recognized in that context as his family, and as the people most likely to stand in for parental support. Tucker’s questions about things like Financial Aid are often best answered with Ben’s support and experience, but Ben does not have enough of an age difference between himself and Tucker to be perceived as his parent. We found that there were important steps that we needed to take in order to be formally recognized as the reliable “go-to” people in Tucker’s life. These steps are required in the university setting to confirm the supported decision making process and gain access to student information.

TJC: The Family Education Rights and Privacy Act (FERPA) is a federal law that sets the standards for how student educational information is shared and secured. The FERPA waiver is a document that can be filled out for anyone in your support network that may require access to such information. By completing a FERPA waiver for Ben when I began at Drexel, it ensured that he would receive access to my financial aid and billing information, and that he could ask questions on my behalf. Though the FERPA waiver asks for the ‘relationship’ to the student, there is no exclusion on the basis of him or her not being a parent or legal guardian. This same waiver enables Ben and Amber to communicate with my faculty advisors to remain informed about deadlines and important tasks.

ADS: The FERPA waiver also allows Ben to talk to the Office of Financial Aid about Tucker’s account when he might be too overwhelmed to do so, and to double-check that all of the important questions were asked and answered thoroughly. Ben describes Tucker’s frustration in these meetings as “analysis paralysis”. For example, he sometimes has difficulty prioritizing questions by level of importance, or knowing when he should ask for further clarification.

We later found that the FERPA waiver allowed me and Ben to converse with Tucker’s professors. If you need a family member of choice to help represent you in making formal decisions at school, do NOT wait for anyone at the institution to offer you a FERPA waiver or any documentation of having a chosen supporter. It’s important to have it ready before you need it. Last year, Ben and I contacted a student support center in need of assistance. At the time we, had no idea a FERPA waiver could be useful in the situation, and were treated dismissively by a university counselor. He said that our relationship with Tucker was essentially “a roommate situation”, and felt that he was exposing himself to legal liability if he communicated with us, but he also failed to inform us about the option of signing a FERPA waiver.

If we had the FERPA waiver or a written plan such as a Statement of Supported Decision Making beforehand declaring us as Tucker’s supporters, we could have avoided this situation.

In a university setting, a FERPA waiver is necessary for anyone who wants help gathering information to help make decisions. In other settings (such as with medical situations), other formal waivers provided by those offices or institutions may be necessary. But an informal, self-generated document of supported decision-making can also be helpful in situations where no waiver or paperwork is “necessary”. Visit supporteddecisionmaking.org to find information and templates for making documents that suit your needs and situations where no specific forms are provided.

TJC: I am not acting in any way less independent by getting help with something like financial aid or taxes, when the difference between doing it on my own and having someone else there is how well I am actually able to make any decision at all, my ability to ask all questions, get complete answers, and follow through with a plan. Having support IS empowerment, and your supporters do NOT necessarily have to be your parents, siblings, or even guardians.

One does not have to believe that who we start out with is just ‘our lot’ and that we must make the best ‘support’ out of that. Choosing who to have for support is a critical part to having any support at all, and that is our right.

SupportedDecisionMaking.org: All the best information on Supported Decision Making, with templates for making your own statement to be notarized 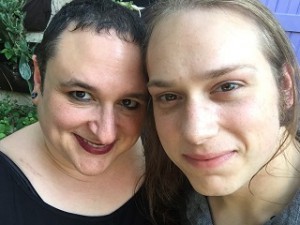 Amber Dorko Stopper is the founder of the community festival Parade of Spirits, Liberty Lands, a Philadelphia event which will be featured in the upcoming book Magical Destinations of the Northeast (Llewelyn Publishing). She and her husband own NinjaGoat Nutritionals, a company which trains and employs people on the autism spectrum. She, her husband Ben, and Tucker, write together as a family on the blog Place of Articulation (https://placeofarticulation.org/).

Tucker James Collins is an undergraduate student at Drexel University majoring in Custom Designed Major Program for Neurochemistry. He is a student of the Pennoni Honors College and was the recipient of the Drexel Autistic Student Program scholarship in 2016. He participates in the Parade of Spirits by making masks and other crafts, and has facilitated workshops in mask-making at local art galleries and schools.

Academically Talented Students With Autism Can Prepare For Success In College

Students who are both academically talented and also on the autism spectrum can enjoy greater success in college based on the correct high school experience....

A new effort is underway to help zoos across the nation become more welcoming to individuals with autism.