Stimming on Stage: My Experience as an Autistic Entertainer

Being an entertainer on the spectrum is nuts, y’all.

When I was a kid, I was practically addicted to spinning. I’d spin and pace in circles just about everywhere – at home, the churchyard at Sunday School, and the playground at recess to the chagrin of many teasing classmates. A couple of decades later, I’d come to find that this behaviour was called “stimming,” related to my newly-discovered Autism Spectrum Disorder diagnosis.

I eventually learned to funnel this love of circular motion into becoming a professional Bollywood and belly dancer.

Now here are some ironic points to that – I am comparably more sensitive to noise than most people, so I’ve always tended to avoid clubs, bars, parties – pretty much any place with more than 4 people and over 60 decibels. I’ve often preferred to spend much of my days doing solitary activities like coding, drawing and playing video games. I largely kept to myself, and as a result, was criminally inept in the social skills department. All in all, I was pretty much vying to be the antithesis of fun.

Can’t blame them; I’ve been doing it for over a decade and I still ask myself that question.

It’s incredibly difficult for most neurotypicals to survive in the entertainment industry, let alone a neurodivergent person. Don’t get me wrong – I love performing, but I must admit, just as there are challenges for individuals on the spectrum in general, these difficulties are amplified tenfold when it comes to being an entertainer on the spectrum.

For one, the entertainment industry is built heavily upon relationships. One of the greatest challenges for many individuals on the spectrum is forming interpersonal connections, and I am no different. Making connections with others has always been possibly my greatest Achilles’ heel.

To make up for my shortcomings, I had to rely hugely on agents, managers – pretty much anyone who had a better way with people than I could ever dream of. They tried so hard to teach me how to present myself and mold me into a caricature of a functioning human person that I can only commend their efforts. Bless their hearts. I once had a manager who doggedly tried to coach me on how to maximize my image for success. She’d say things like, “It’s all about making connections,” or even worse:

“You have to network.”

Yikes. These were possibly the most terrifying four words one could have assaulted my ears with. You’d have had better luck telling me to light ice on fire. I’m an artist, and I should focus on being an artist, right? Why would I need to talk to people? Preposterous! All I ever wanted to do was dance, get paid, and get free food.

But then, without my agent as my crutch, I would often struggle to find work, with dry spells extending into months. For far too long, I downplayed the importance of human connection, only to realize that even when I tried my hardest, I just wasn’t adept at making connections and retaining them. Time and time again, I noticed that people who did possess that skill fared better with opportunities than I ever did, regardless of the skill of their craft, while I often ended up alone. And broke.

I’d try to break out of my comfort zone and try this “networking” thing, forcing myself to attend conferences, lounges, afterparties and other sensory-overwhelming events. Just about each time, I’d come home running on empty, wondering, “why isn’t this working?”

As much as I loved to be on stage, the other responsibilities required to sustain a life in the entertainment industry started to prove a bit too taxing for me. The “me” that I displayed on stage would be in stark contrast to the me out of costume, but I just could never seem to transfer that onstage charisma into my offstage personality, so even when I tried, these connections would be ephemeral at best. 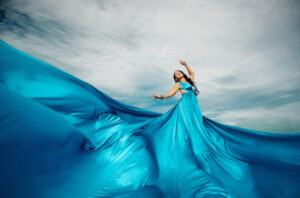 One day, I happened upon a dance event almost by accident. I had meant to come as a spectator, but sure enough, unbeknownst to me, I was recognized by someone there, and they convinced the event organizer to invite me to perform.

As I was in my usual garb (bespectacled, hair in a bun, large jacket), I clearly wasn’t dressed for the occasion – but no matter. As soon as the music started, I sloughed the scarf and jacket, loosened my hair, and made a twirl so aggressive that it flung my glasses across the room. I didn’t think anything of it at the time, but following that performance, I had people coming to me in droves saying, “I did not expect that!”

I learned something that day. It never once occurred to me how much people judge a book by the proverbial cover, and that one of the major reasons I had trouble getting gigs was simply because of my outward appearance and demeanor. I was often just not taken seriously as a Bollywood and belly dancer. Chalk it up to my literal way of thinking, but I couldn’t see why wearing glasses was in any way relevant to dancing, so I didn’t really factor in how I was perceived out of costume. These types of associations are oftentimes lost on me, so I never really lent it any credence until I started to experience it for myself.

So I began using it as a gimmick. I’d arrive at a venue in my normal garb, setting expectations, and then do the transformation thing. Sure enough, it would provoke a heightened reaction every single time. I was flabbergasted. Here I am, a whole adult person, and I didn’t realize how heavily people rely on first impressions. I couldn’t believe how easy it was to essentially manipulate people, and it was a thought that I honestly found somewhat distressing.

In time, I developed a tumultuous relationship with myself and what was needed for me to survive in “the business”. It pretty much came down to – be fake, or be broke? At one point, I felt so much incredible pressure to conform to, and maintain, an image that was in such opposition to my natural way of being that I eventually experienced an extended burnout. Not only did I stop performing, but I withdrew entirely from interacting with others for over a year.

I wasn’t diagnosed at the time, so I hadn’t known of the term, “autistic burnout,” but that didn’t make it any less debilitating, or real, for me. I couldn’t help but obsess over my consistent social failings, so much so that I had lost all desire to interact with others, even on social media. I felt inherently broken as a human being. It was this experience, however, that led me to the research that ultimately directed me to getting diagnosed.

My Autism diagnosis played a critical part in my development as an entertainer, and interestingly, my experience as an entertainer was what ultimately convoyed me to my diagnosis – and I say this with utmost gratitude. My diagnosis helped me bridge a previously unknown gap between my way of perceiving the world and that of others, helping me relate to others better (or at least better pretend to, because goodness knows I still don’t know what’s going on sometimes). It’s a wild ride, and I wouldn’t change the experience for anything in the world…

…except an agent, maybe. I could still use one of those.

Sevdha is a dancing developer on the spectrum who drinks more tea than a colonial New England harbor. She has an unhealthy fascination with ocean sunfish and other unusual-looking creatures, and should therefore be supervised when choosing a life partner. Sevdha likes to eat dinner for breakfast, and speaks Japanese for no apparent reason. Being from a country of former British rule, she had a genuinely hard time not adding a ‘u’ to the word, “harbor.”