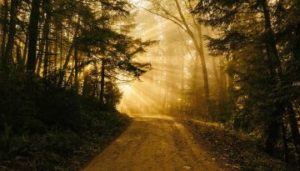 An Autism Nature Trail, at Letchworth State Park in upstate New York, will open this fall, thanks to a group of volunteers who worked together over several years to create and build the trail. Every feature of the mile-long trail was designed with neurodiversity in mind, from the type of stone chosen for the steps and the engineered wood fiber laid on the paths to the patterns of three repeated all along the trail. Eight stations offer different experiences and places to take breaks, including a sensory station and a reflection area. “While other entities are making public places accessible, we’re making an accessible place public,” Loren Penman, one of the original volunteers and a retired middle school principal, told WXXI, a public radio station, for an article about the trail.

Ali Abida, who is 14, autistic, and minimally verbal, inspired the creation of the Letchworth Autism Nature Trail, when his mother, Catherine Abida, noticed how much her son enjoyed deep nature and how it calmed him. When he was 4 or 5, she told the radio station, she took Ali to a state park for a hike and he smiled when they stopped to watch waterfalls and cascades.

That would not surprise Temple Grandin, Ph.D., an internationally known spokesperson for autistic people and a professor of animal sciences at Colorado State University, who was an informational source to Penman and other volunteers. As described by Penman in the WXXI article, Dr. Grandin explained that the trail should be in deep nature and the founders followed that advice.

In Dartmouth, Mass., two mothers, Amanda Deane and Judy Pasierb, have also created an outdoor education venue for children with a special focus on autistic kids that includes skill building, encouraging social connections, and providing opportunities for unstructured play. At Flying Starlings Farm, children can get outside to interact with nature and learn skills such as sewing, crafting, and felting, as a South Coast Today article reported. In addition to agricultural opportunities, Deane told the newspaper that they are planning a “fairytale sensory garden with columns, walls, fountains and a bed made of moss. The farm will be open to the public in the summer with signs to teach the public about the meaning of a sensory garden and how it works for children with autism.”

Benefits of Spending Time Outside

Scientific studies have long touted the benefits of time spent outdoors for children and adults alike. Now, research is also being done that supports the positive benefits of being outdoors for autistic children specifically. For example, a small study, conducted by researchers in China and published in 2019, showed that exposure to nature provided motor-sensory, emotional, and social benefits to autistic children. Michelle Brans, the director of a therapy center for children near Toronto, Canada, said in a New York Times article that the natural world gives the nervous system “a chance to decompress and restore itself. That’s especially important for autistic kids, because their sensory system can get overloaded a lot quicker.”

New York City teacher Erin Laraway routinely takes her students to a small garden outside the Brooklyn Occupational Training Center, a public high school for adolescents with special needs. Her hope is that the garden will “help her students, many of whom fall on the severe end of the autism spectrum, improve their verbal and social skills as well as equip them for employment after they graduate,” as noted in the New York Times article.

Laraway has seen positive results from the time her students have spent in the garden, including more interaction among the students than she sees in the classroom as well evidence of a sense of accomplishment and motivation. One of her students waters plants and takes other tasks without being asked, but rarely shows that same initiative in the classroom, she said in the article.

In London, a Nature Learning Program at the Odessa Infant School encourages a class of eight young autistic children, age 3 to 7, to interact with the natural world by providing materials and resources, such as willow withies (rods), a tarpaulin “tunnel” hung from a tree, and tree trunk stepping stones, as well as outdoor activities, according to an inews article. Those outdoor activities include mud painting, planting seeds, and looking for worms, among others.

The program developer, the City of London Corporation, is studying the program to see what benefits it provides to the children in terms of their wellbeing and improving communication, social interaction, and independence. Oliver Sells, Chairman of the City of London Corporation’s Open Spaces and City Gardens Committee, said in the article that he hopes the work will encourage similar initiatives and further study of the benefits of learning methods based in nature, “Being outdoors has huge benefits to our mental and physical health, and this work shows how it can also benefit the skills development of children — particularly children with autism, providing different learning mechanisms to improve different skill sets.”

Parents and others who care for autistic children don’t have to enroll their children in a program or even go far from home to take advantage of the benefits the outdoors offers. Dongying Li, an assistant professor at Texas A&M University who studies landscape and health, suggested in the Times article that parents, educators, and other caregivers can take advantage of “a puddle, a tree, a pocket park or even a photo of a garden, and plan for incremental steps, starting from where you feel most comfortable,” to allow children the chance to enjoy unstructured play in their own way.

Sherri Alms is the freelance editor of The OARacle, a role she took on in 2007. She has been a freelance writer and editor for more than 20 years.

Autism in Women and Girls

In November, two female celebrities in the United Kingdom announced that they had been diagnosed with autism as adults. Their announcements and the flurry of...

Compared to the start of school last year, there was much for children and parents to celebrate when the 2021-22 school year started, including the...