Roles and the Reilly Family | Organization for Autism Research 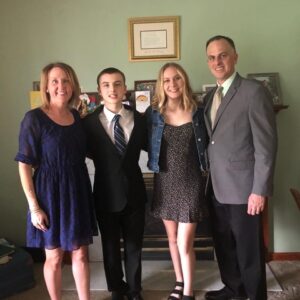 We Reillys are a typical family making our way through the 21st century. My wife, Linda, and I met in college and married in 2000. We have two children, Charlotte and Alexander. Charlotte is nearing the end of high school, and Alexander is anticipating the conclusion of his freshman year. We also have two furry family members, our black cats, Lucky and Storm Runner.

We learned that Alexander has autism spectrum disorder (ASD) when he was two years old. We did not know at the time how much of an impact his diagnosis would have on our family. It has truly made our bond stronger and he has taught us to celebrate the little moments in life as something big. This is something that families with neurotypical children might take for granted. We will never forget when he first said “I love you” back to us when we didn’t know if would ever hear those words or the first time we had a birthday party where he laughed instead of melting down at the loud noises. His development has been a continually evolving process that involves all of us. We have each taken on support in ways specific to our individual relationships with Alexander, his needs, and our abilities. Alex also contributes both to how he deals with ASD and to our family functioning.

During his pre-K and elementary school years, I was on active duty with the military, and Linda stayed at home, shouldering the responsibility for Alexander’s care. She researched therapies, coordinated home visits by therapists, and took Alexander on her daily errands. The large role Linda had in Alexander’s early life created a strong bond between mother and son that exists to this day.

Since kindergarten, Alexander has attended schools in inclusive classrooms with aides who helped him focus and keep pace with the rest of his peers. During this time, he and I found and bonded over some common interests. We began to discuss military history, current events, the Armed Forces, and a range of other topics. We often take rides to nearby battlefields, museums, and hobby stores, talking away about what we see and learn, as well as other things on our minds, and enjoying each other’s company. As Alexander progressed through middle school, he made his own decisions regarding helpers (i.e., TSS aides) in the classroom. He decided that he wanted to make his way through school without these assistants. Linda and I both respected and supported his decisions when it came to his education.

His experience in middle school not only increased his knowledge in history, which helped strengthen the bond between son and dad, but also showed both Linda and me that he is able to make important decisions about his life. The latter is so important because he will be required to have to decide for himself in the future and also shows him that we, as his parents, will support him in his future endeavors.

Charlotte also has a special place in Alexander’s life. She is not only an excellent big sister; she serves  as a “sounding board” for Alexander, helping him navigate the challenges of high school and the world of social media. Linda and I can often hear his deep voice in her room as he discusses topics that he may not feel comfortable discussing with Linda and me. Charlotte maintains his confidentiality unless it’s something that she considers very concerning.  She is graduating this year and has decided to pursue a career in the medical field.  I know that she will be amazing at this because of her love and support for her brother. She has learned from a young age how to take care of her brother and make sure he is safe, something Linda and I will always be grateful for.

Even our cat, Storm Runner, helps to support Alexander. By being his constant and affectionate companion, Storm helps Alexander reduce stress and anxiety. He is usually where Alexander is, whether sitting on the couch, playing on the computer, or even sleeping. If you know cats, you know most do not appreciate being picked up, but Storm lets Alexander pick him up and carry him around, purring the whole time.

While we are all very proud of Alexander’s development, we continue to support and prepare him for the adult world and feel hopeful about what his future holds. Our goal is the same as most parents: to enable Alexander to live on his own with a stable career path of his choosing. He has taken an interest in computers and will attend a vocational-technical school next year.

Linda continues to serve as his biggest advocate, coordinating with education staff to ensure he continues his progress through high school. He and I continue our conversations and trips. Big sister continues to talk with him on a range of teenage topics, and Storm works his magic as only he can.

Kids with ASD, like Alexander, may need extra support. It is up to each family to determine how its members can best support each other and ensure that family members can work together to achieve family goals. Our family needs and preferences change and evolve, as they do in every family. Some days, Alexander wants to talk to Mom; other days, it’s me or Charlotte. There isn’t a most important person in our family. We all have roles to play and support we can provide and that’s the bottom line: the role each family member plays is critical to the family’s success and well-being. All of us, even Storm and Lucky, contribute to who we are together and individually.

Linda and Shane Reilly reside in Carlisle, Pennsylvania, with their two children, Charlotte, 17, and Alexander, 14. Together, they form the Reilly Regiment and have participated in a number of races for the Run for Autism Team since 2011.

Resources for Autistic and LGBTQIA+ People

Autistic individuals face many challenges in life, which can be exacerbated if they belong to another community such as the LGBTQIA+ community. This month’s Resource...

Healthy Relationships on the Autism Spectrum