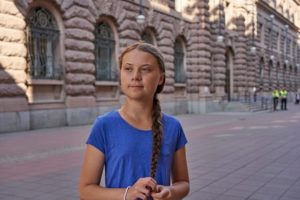 At 17 years old, Swedish climate activist Greta Thunberg has been nominated for the Nobel Peace Prize twice, has been named TIME Magazine’s youngest ever Person of the Year, and has addressed world leaders in a now viral speech given at the UN Climate Action Summit. Thunberg is also on the autism spectrum and vocal about her diagnosis.

Thunberg first gained recognition for launching School Strike for Climate, a movement that urged students to push for governmental climate action. Thunberg started a weeks-long strike calling for decreased emissions from the Swedish Parliament. She is also responsible for leading the largest climate demonstration in history, in which over 4 million people from 161 countries participated. Due to her accomplishments, Thunberg is now a household name – and her impact has been particularly noted within the autism community.

Some self-advocates credit autism for abilities to be hyperfocused, channel passion into energy, and ignore insults. The stigma around autism can make it seem as though being on the spectrum is always something that negatively impacts a person’s life. But Thunberg has openly declared that there is nothing negative about her diagnosis, instead likening it to a superpower. “I have Aspergers and that means I’m sometimes a bit different form the norm,” tweeted Greta. “And – given the right circumstances – being different is a superpower.”

Her stance on autism has earned her the support and admiration of many others on the spectrum. Many within the autism community have praised Thunberg for speaking openly about her autism and the advantages it brings, considering her an inspiration to other people with ASD. Individuals around the world have taken to Twitter to show their support for the young activist. The hashtags #ImWithGreta and #AutisticsForGreta are some of the most popular.

In particular, Thunberg has captured the attention of many women on the spectrum. According to Dr. Dana Waters, a psychology professor on the spectrum interviewed by Bustle, Thunberg’s visibility is powerful because she represents an authentic example of a woman on the spectrum. Many women with autism have spoken out about how Thunberg has made them feel more comfortable with their diagnosis by speaking openly about hers.

Thunberg’s openness about her autism strikes many in the community as a refreshing change from limiting stereotypes and has the potential to bring greater understanding about autism to the general population.

Stimming on Stage: My Experience as an Autistic Entertainer

Being an entertainer on the spectrum is nuts, y’all. When I was a kid, I was practically addicted to spinning.