The employment prospects for autistic adults are grim, as a recent Politico article noted, with only about one-third of autistic adults in paid jobs for more than 15 hours a week. However, there are encouraging signs in the news that promise change.

One of those, also noted in the Politico article, is the Biden administration’s announcement that it plans to “significantly increase the employment rate of adults with autism and other developmental differences.” In December 2020, the U.S. National Geospatial Intelligence Agency became the first government agency to recruit neurodiverse employees, with a pilot program that hired four employees. Its efforts were part of a larger initiative spearheaded by MITRE Corporation and several academic partners, which were awarded $300,000 by the Government Effectiveness Advanced Research Center to establish a federal workforce pilot, with the goal of assisting agencies in how to better attract, hire, and retain talent on the autism spectrum. They partnered with Melwood, which recruits employees with disabilities.

As an article in the Federal Times described, that pilot focused on “hiring autistic talent for cyber and data-centered roles, largely due to the fact that there are severe shortages of personnel to fill these kinds of roles at many agencies.” The pilot’s goal was to help federal agencies gain an understanding of how to recruit, hire, and support autistic employees, while the initiative’s long-term goal is to expand the hiring of neurodivergent employees generally. 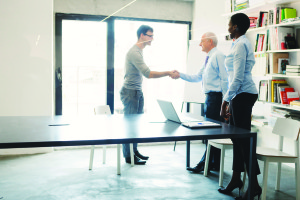 Much of the encouragement, however, can be found in the private sector where a growing number of entrepreneurial organizations are taking on the role of job placement for autistic people. OAR’s Hire Autism initiative is a good example. Politico lists several others as well, including Integrate, Autism Speaks Employment, NEXT for AUTISM, NeuroTalent Works, EVOLVE, Autism Workforce, Zavikon, Uptimize, Potentia, SourceAbled, and Evolibri.

Susanne Marie Bruyere, a professor of disability studies at Cornell University, said in an article on Quartz.com, that she has never seen “companies so enthusiastically and energetically trying to make something work.” She saw a shift begin about six years ago, when companies looking for people in cybersecurity, coding, and debugging were struggling to find employees who could do the work. After the Israeli army developed a program to recruit autistic people, companies followed its lead, including SAP, Hewlett-Packard, and Ernst & Young, among others. Those companies looked to diversity and inclusion experts as well as existing autistic employees, parents, and other stakeholders to guide their efforts.

JP Morgan Chase’s Autism at Work program is one of the most well-known. Begun in 2015, the program has resulted in 250 autistic people being hired in nine countries, with a 90% annual retention rate, according to an article on the Built In website. Today, the company offers support from the interview process through employment, ranging from tours of the places job candidates would work, both to observe and to see if the workplace would trigger sensitivity issues, to accommodations like low lighting and workplaces in quiet areas.

Ernst & Young followed, announcing in 2016 its first Neurodiversity Center of Excellence as part of a pilot program to offer jobs to neurodiverse candidates. Since then, it has established six centers in the United States, one in Canada, and two in India, according to a Boston Globe article, which also noted that more than 150 people have been hired as a result.

Both JP Morgan Chase and Ernst & Young helped to launch the Autism @ Work Employer Roundtable, along with Microsoft and SAP. Begun in 2019, the goal was to bring employers together to share best practices in order to hire more autistic people. The group, which is hosted by Disability:IN, published the Autism @ Work Playbook, which describes what the Roundtable has learned and its insights and approaches. Today, the Roundtable is known as the Neurodiversity @ Work Employer Roundtable and includes almost 40 companies.

Bank of America has also made a concerted effort over the past several years to hire neurodivergent employees, working with Philadelphia-based Neurodiversity in the Workplace. Craig Froelich, Bank of America’s chief information security officer, said in an article on Built In that the company has hired “dozens” of neurodivergent employees, and that the group has the “highest rate of job-offer acceptance and a near 100 percent retention rate.” He also notes that cryptosecurity sector needs their problem-solving skills, referring to them as among the “best and brightest minds around the table.” When a cryptographer who worked for him disclosed that she was neurodivergent, he didn’t even know what the term meant. Since then, he has learned and also discovered that a number of his 3,000 employees are neurodivergent or had neurodivergent family members.

With the guidance of Neurodiversity in the Workplace, Bank of America has revised some of its recruiting and interviewing procedures. For example, interviewers now ask clear “yes and no” questions and also ask neurodivergent candidates to complete a series of projects so that hiring managers can see how they relate to peers and to the project, according to the Built In article. As the article reported, neurodivergent employees also get support so they can do their best work, including quiet places to work, noise-cancelling headphones, and access to a neurodiverse employee resource group. The cybersecurity sector as a whole, he added, needs two and a half to three million people to fill the skills gap by the end of this year. “I wanted to see if we could tap into this as a new pipeline for recruiting talent,” Froelich says in the article. “That’s where the journey began.”

In July of this year, Google Cloud launched its Autism Career Program with a goal to further expand its efforts to hire and support autistic individuals. It plans to train up to 500 managers and others who are involved in hiring processes to work “effectively and empathetically with autistic candidates and to ensure Google’s onboarding processes are accessible and equitable,” according to a post on the company’s blog. Google Cloud is working with the Stanford Neurodiversity Project, which provides consultation services to employers to advise on opportunities and success metrics for neurodiverse individuals in the workplace. Stanford will also provide coaching to applicants, as well as ongoing support for them, their teammates, and managers once they join the Google Cloud team.

Good for the Bottom Line

A September Forbes article noted that hiring neurodivergent people is not only good for those employees, it’s good for the bottom line. It cited a 2017 Harvard Business Review article that described benefits several large companies with neurodiversity programs have discovered, including productivity gains, quality improvement, boosts in innovative capabilities, and broad increases in employee engagement. Nick Wilson, the managing director of HPE South Pacific —an organization with one of the largest such programs — says that no other initiative in his company delivers benefits at so many levels.

The Forbes article also referred to a 2018 study done by Accenture, the American Association of People with Disabilities, and Disability:IN that found that companies who hire people with disabilities perform better financially with 28% higher revenue, double the net income, and 30% higher economic profit margins, based on a small sample of 45 companies.

As the Quartz article notes, neurodiversity hiring programs are expanding, and that’s a good sign, with some multinational programs, such as JP Morgan Chase, including their international offices in the program.

Sherri Alms is the freelance editor of The OARacle, a role she took on in 2007. She has been a freelance writer and editor for more than 20 years.

With COVID travel restrictions and requirements easing, people are thinking of summer vacations once again. News outlets are reporting on a number of initiatives to...

New Film Highlights the Story of an Autistic Teenager

Tyson’s Run, a film based on the true story of an autistic teenager, was released on March 11. The film follows the journey of Tyson,...

The CDC recently revamped its developmental milestones checklists for the first time since they were created in 2004. The clearer benchmarks make it easier for...