Book Review: The Curious Incident of the Dog in the Night-time | Organization for Autism Research

Book Review: The Curious Incident of the Dog in the Night-time

In this piece, Serena Shim, sister of someone on the spectrum, discusses the novel that caused so much controversy in the autism community.

Mark Haddon’s best-selling novel, The Curious Incident of the Dog in the Night-Time, is a detective story about fifteen-year-old Christopher Boone. It received many awards as well as criticism by the autism community for its portrayal of someone with Asperger’s Syndrome.

Christopher is presented as a mathematical genius who has trouble interpreting social situations and does not understand metaphors. When a dog is killed in his neighborhood, Christopher sets out to solve the mystery. As he becomes more involved with the murder case, he ends up discovering the truth about his own life and family. His journey in looking for the dog’s murderer soon becomes a search for his mother.

Even though this novel does not directly reference autism, the book’s back cover originally described Christopher as someone with Asperger’s. Mark Haddon also admitted on a blog post that he did not do any research on autism, which is why there has been so much criticism towards the book. This may not have been the first fiction piece written on Asperger’s, but I believe it was the first novel to achieve widespread notice. I remember when I first read this novel my freshman year of high school; it was my, as well as many other peers’, introduction to the term Asperger’s.

My brother is now fourteen and a half years old. Since his diagnosis, I have learned a lot about the autism spectrum, both from personal experience and research. I have come to realize that this novel is not an accurate portrayal of Asperger’s. While Christopher does have many traits of someone with autism, this novel teaches readers autism’s stereotypes, rather than the reality. I wish that Mark Haddon could have made a new edition with a disclaimer at the beginning of the novel.

It is unique that the chapters are numbered by prime numbers in order to tie in with Christopher’s character. I also thoroughly enjoyed looking at the interesting illustrations and diagrams that were in the novel. Yet, I am disappointed that novels like these, along with the media, have popularized many stereotypes that people with autism have to overcome.

There has been an increasing prevalence of characters with Asperger’s on TV shows and films. There are many media portrayals that are misrepresentative. A common stereotype is that people with autism have a special talent. Savant syndrome is a condition in which someone with mental disabilities demonstrates an ability, like memory, that is significantly above average. Despite the fact that savants only make up about 10% of the autistic population, there are many shows and films such as Rain Man and The Good Doctor that depict those on the autism spectrum to have savant syndrome. This creates a huge misunderstanding of certain aspects of autism. In other words, the discomfort of breakdowns, sensory dysfunction, speech challenges, and repetitive behaviors like flapping or rocking are rarely seen in the media.

Nevertheless, this novel became so prominent that it has been one of popular culture’s introductions to the autism spectrum. The Curious Incident of the Dog in the Nighttime was adapted into a play that has been praised for promoting acceptance of difference – Autism Speaks, an advocacy organization, congratulated the play for its Tony wins in 2015. Many in the autism community believe that the novel and the play helped spread more awareness of autism spectrum disorders to more people. I hope that we can all work together toward spreading a better understanding of what autism is about and increase support in our communities. 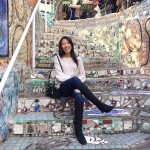 Serena studies psychology at Villanova University to one day become an occupational therapist. She is a sister to 14 year old Marcus who was diagnosed with Autism when he was three years old. She has particular interests in working with individuals with special needs, but she also has always been interested in the human mind and passionate about combating the stigma that surrounds mental health disorders.

Whether your child struggles with nonverbal communication or has atypical speech patterns, therapy should not end when they leave school. While shadowing and participating in...

In a time like this where change is inevitable, some autistic children need constant support at home that many parents are not able to provide...

Something to Draw About

My name is Ariel Coburn and I am a self-advocate. I have been drawing for as long as I have been able to hold a...